When NET Ministries Evangelized Me 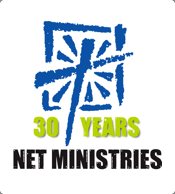 NET Ministries evangelized me at a DWeek retreat in 2001 at the age of 17.

NET stands for National Evangelization Teams, and DWeek stands for Discipleship Week. Though they are based in Minnesota, it is a national outreach. Young adults fly in from all over the country every August for training and are sent in 12 teams. They travel the country in a van, from youth gig to retreat to parish mission to various youth related activities. DWeek is one of the formatted retreats that occur all over the country.

My parish youth group sponsored 5-6 teens to attend DWeek every year. The local one that we attended was sponsored by the Diocese of San Bernadino, and held in UC Redlands. I always had an impression of the teens selected to attend as being very privileged. I was so excited when I attended that I was willing to miss a week of high school graduation practices. Luckily for my family the Dean allowed me to walk at the ceremony even though I ditched all the graduation practices. I ditched it for a week of Discipleship, Liturgy, Adoration, and Jesus.

Several local youth ministers assisted at the DWeek, particularly as small group leaders. I remember my leader had colored his hair bright blue for the event, and played a character in a week-long thematic skit called “Thirsty Dude.”

There were a lot of laughs and fun throughout the week, but there was also a lot of substance. Encountering the Lord began to take on a different character being led by a different group of people. It broke the routines and cliches from my own discipleship experience, and definitely broadened my horizons. Looking back, I really think that my Eucharistic Devotion was solidified during DWeek.

Here we had this group of young adults who had been road tripping for Jesus since September. They gave up having boyfriends/girlfriends. They gave up partying/binging it up in a freshman year of college. They gave up advancing themselves in the world.

For all I know, they could have felt like losers in their hometown. They could have had no success in their attempts to evangelize when they were teenagers or young adults before they joined. I cannot even judge their souls to say that they were somehow so ultra-humble as to be more magnificent conduits of the Spirit.

I was all ears having people make such a radical commitment to the Gospel, and subsequently to me.  I wanted in on this something that they could give a year of their life to. I wanted more of the Christ who inspired them to turn their backs to their life and their faces to him.

I even had three friends, one who attended the DWeek with me, actually join NET for a year. It was a very meaningful, as well as incredibly dramatic, event for them.

Even if we are not qualified for a DWeek, or are a “youth,” or even participating in evangelizing youth, there is something that we can recognize in the prophetic power of inviting radical disciples.

From what I hear, most dioceses and venues book NET two or three years in advance. There is a demand.

Brother Mark Menegatti is a Friar with the Order of Saint Augustine. He is a hip hop beatmaker & lyricist for the New Evangelization. Under the patronage of Saint Ephrem of Syria, he integrates theology, mysticism, and hip hop in his blog and in all of his music. He is currently in his fourth year of Theology in Chicago, and looks forward to ordination to the Priesthood. You can find his writings, theological reflections, chastity exhortations, and original music on his tumblr. He’s also found at Bandcamp music page, Twitter, and Facebook.

2 responses to “When NET Ministries Evangelized Me”