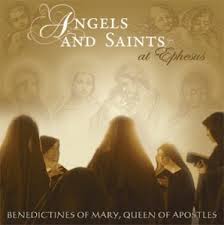 A few years ago, the Benedictines of Mary, Queen of the Apostles sent me a CD of their music, an album titled “Christmas at Ephesus.” It quickly became my favorite Christmas album and I did do just what they intended and sent them a donation. (Best direct mail campaign ever.)

Their “Marian Hymns at Ephesus” album, which also arrived via direct mail, has soothed me many times and has one of my favorite renditions of the Ave Maria.

So I was already a big fan of theirs when they hit it big last year with their wide release of their “Advent at Ephesus” album. Not only was it a great album, but it was recognized all around, by classical music enthusiasts and major news networks.

Their newest album was released yesterday, “Angels and Saints at Ephesus,” and I expect it will storm onto the classical music scene again.

But I didn’t think about this as “New Evangelization” until I listened to Father Jay Finelli interview Monica Fitzgibbons, co-founder of De Montfort Music, about this new album.

This music is an important work of the New Evangelization, Father Jay pointed out. It reaches people in ways they wouldn’t be otherwise reached.

Father Jay referenced a comment from Steve Jobs’s biography where someone asked Jobs what music was on his iPod. Turns out, Jobs, who was not Christian, had Gregorian chant and said something to the effect that, when he listened to that music, he knew there had to be a God.

These sisters are doing what God called them to do. They learned to sing so beautifully because they love God. When I hear their albums, I get chills. It’s beauty, and it’s touched by God.

These sisters aren’t out to change the world, not in the storm-out-and-take-over mentality I seem to always try to have myself. No, they’re cloistered and doing the work their vocation calls them to do. They sing because it’s part of their work. They sing well because they want to give God their best.

And I, for one, am evangelized by their witness and enriched by God at work through them.

Sarah Reinhard continues to be shocked and delighted that her life as a grown-up involve horses, writing, and sparkly dress shoes. In her work in the New Evangelization as a Catholic wife, mom, writer, parish employee, and catechist, she’s learned a lot of lessons, had a lot of laughs, and consumed mass amounts of coffee. She’s online at SnoringScholar.com and CatholicMom.com, and is the author of a number of books.