Recently, I’ve been overviewing the USCCB’s “Disciples Called to Witness.” In one post at my blog I diagrammed where evangelization and catechesis come into play.

Those who have never heard the Gospel or have fallen away from it need evangelization. Those who are believing Christians need catechesis, to continue to deepen their faith. 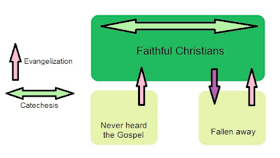 There is a problem with my diagram, though. Something is missing.

We are not the only evangelizers.

Christian evangelization, for much of our history, has been about entering pagan cultures – those with existing, established beliefs – and bringing the Gospel to them.  What we encountered was resistance.  Now, we enter cultures – pagan in some cases, though mostly Christian or “post-Christian” – and find people of other faiths and no faith actively working to convert people away.  What we encounter is not just resistance but opposition. 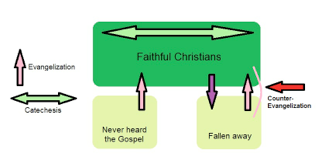 In the past, we were running hurdles – trying to safely navigate the field of objections and inculturated ideas. Now, we are running for a touchdown, with opposition charging in the other direction. The hurdles are hitting back.

When the opposition is evangelizing, evangelizing becomes apologetic. It becomes, in part, defensive.  The line between evangelist and apologist is blurring, and while there is still a place for specialists, the majority of us can no longer focus on one and ignore the other.

When we are attacked, we have to stop and defend. When we find something false that has already been laid down, we have to clear away the rubble before we can build.  One way to do these things is to find the most foundational idea that the person has wrong. Through conversation, through questions, through whatever means, work back through a hierarchy to find not the first thing that isn’t believed but the most fundamental thing that isn’t believed.

You cannot accept that Jesus is God if you reject the Trinity as illogical or contradictory.

You cannot accept the revelations of the Trinity if you deny that God has revealed Himself.

You cannot accept that God has revealed Himself if you deny that God is personal.

You cannot accept a personal God if you accept no God at all.

You cannot accept God’s existence as objectively true if you deny objective truth.

You cannot accept that truth can be objective if you don’t understand what “truth” is.

We must be both Mark 16:15 Christians and 1 Peter 3:15 Christians. This is one strategy for evangelizing apologetically, for spreading the Gospel tactically and efficiently, recognizing that there are competing “truths” out there actively being spread and undermining, in many cases, the very foundations of belief.

Joe Wetterling is a professional educator, homeschooling dad, and writer. He's appeared at national conferences, both secular and religious, speaking on education, technology, and philosophy. Joe writes online for New Evangelizers, as well as his own blogs. He's taught in the Holy Apostles MOOC program and currently teaches Natural Theology at the new Dominican Institute. He's a member of the Militia Immaculata and current President of the Catholic Writers Guild. Learn more about him at JoeWetterling.com.

One response to “Apologetic Evangelization”